Skip to the ‘Juicy Code 🧃’ section if you just want the code and don’t care about the preamble of why you might want this!

Finding the average color of an image is a nice trick to have in your toolbelt for spicing up views. For instance on iOS, it’s used by Apple to make their pretty homescreen widgets where you put the average color of the image behind the text so the text is more readable. Here’s Apple’s News widget, and my Apollo widget, for instance:

There’s lots of articles out there on how to do this on iOS, but all of the code I’ve encountered accomplishes it with Core Image. Something like the following makes it really easy:

Core Image is a great framework capable of some insanely powerful things, but in my experience isn’t optimal for something as simple as finding the average color of an image because it takes up quite a bit more memory and time, things that you don’t have a lot of when creating widgets. That or I don’t know enough about Core Image (it’s a substantial framework!) to figure out how to optimize the above code (which is entirely possible, but hey the other solution is easier to understand, I think).

You have around 30 MB of headroom with widgets, and from my tests the normal Core Image filter way was taking about 5 MB of memory just for the calculation. That’s about 17% of the total memory you get for the entire widget for a single operation, which could really hurt you if you’re up close to the limit. And you don’t want to break that 30MB limit if you can avoid it, from what I can see it seems iOS (understandably) penalizes you for it, and repeated offenses mean your widget doesn’t get updated as often.

You can see in Xcode’s memory debugger very clearly when Core Image kicks in for instance, causing a little spike, and almost more concerning is that it doesn’t seem to normalize back down any time soon. 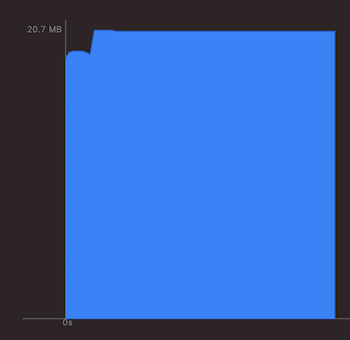 (That might not be the most egregious example. It can be worse.)

An easy approach would just be to iterate over every pixel in the image, add up all their colors, then average them. Downside is there could be a lot of pixels (think of a 4K image), but thankfully for us we can just resize the image down a bunch first (fast), and the “gist” of the color information will be preserved and we have a lot less pixels to deal with.

One other catch is that just ‘iterating over the pixels’ isn’t as easy as it sounds when the image you’re dealing with could be in a variety of different formats, (CMYK, RGBA, ARGB, BBQ, etc.). I came across a great answer on StackOverflow that linked to an Apple Technical Q&A that recommended just drawing out the image anew in a standard format you can always trust, so that solves that.

Lastly, there’s some debate over which algorithm is best for averaging out all the colors in an image. Here’s a very interesting blog post that talks about how a sum of squares approach could be considered better. Through a bunch of tests, I see how it could be with approximating a bunch of color blocks of a larger imager, but the ‘simpler’ way by just summing seems to have better color results, and more closely mimics Core Image’s results. The code below includes both options, and I’ll include a comparison table so you can choose for yourself.

Here’s the code I landed on, feel free to change it as you see fit. I like to keep in lots of comments so if I come back to it later I can understand what’s going on, especially when it’s dealing with bitmasking and color profile bit structures and whatnot, which I don’t use often in my day-to-day and requires a bit of a rejogging of the Computer Sciencey part of my brain, and it’s really pretty simple once you read it over. 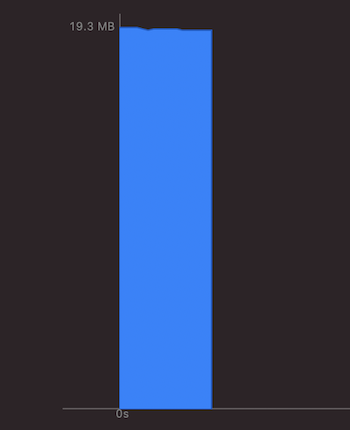 As you can see, we don’t see any memory spike whatsoever from the call. Yay! If anything, it kinda dips a bit. Did we find the secret to infinte memory?

In terms of speed, it’s also about 4x faster. The Core Image approach takes about 0.41 seconds on a variety of test images, whereas the ‘Just Iterating Over Pixels’ approach (I need a catchier name) only takes 0.09 seconds.

These tests were done on an iPhone 6s, which I like as a test device because it’s the oldest iPhone that still supports iOS 13/14.

Lastly, here’s a quick comparison chart showing the differences between the ‘simple’ summing algorithm, the ‘sum of squares’ algorithm, and the Core Image filter. As you can see, especially for the second flowery image, the ‘simple/sum’ approach seems to have the most desirable results and closely mirrors Core Image. 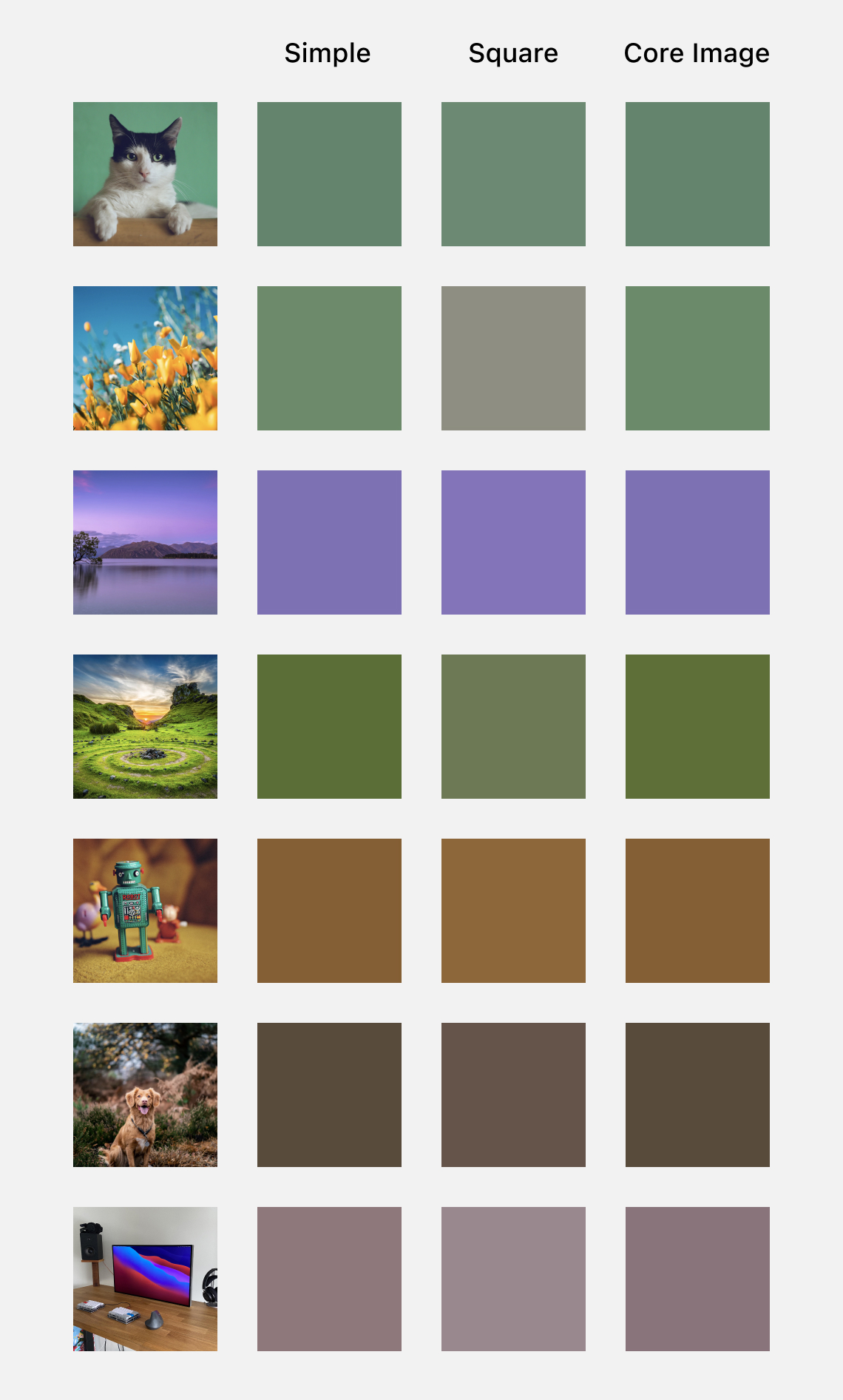 Okay, that’s all I got! Have fun with colors!

‹ Table of Contents Selector View
Trials and Tribulations of Making an Interruptable... ›